Here's the parts list from Jim Z's - Centuri Quasar #KC-7
This clone build had a goal - to use only leftover spare parts! No purchasing, no vendor order. My substitutions shown in italic
Quasar build at right by Tim Morley, posted on YORF 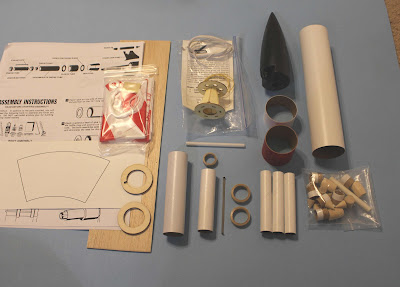 Posted by Chris Michielssen at 11:13 PM No comments:

There are some Centuri logos online, but the edges are fuzzy.
The images may have been scanned. Each time it is copied, the edges get more distorted.
On the online available logo shown above -
Notice the oval border ends are squared off. The Centuri name isn't sharp.
On my upcoming clone build, I needed the Centuri name in a reversed black, without the oval.
This required a two hour re-draw in Corel Draw.
The lower logo (above) has been cleaned up. I even corrected some subtle letter spacing.

The Centuri Quasar (Kit #KC-7) decal sheet was interesting.
The top logo is my re-draw of the original.
The lower logo found on the decal sheet was condensed, not the normal full width. 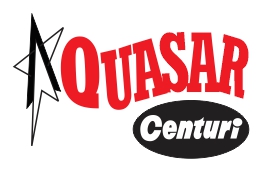 Here's another logo on the kit name decal.
That white reversed Centuri logo in the black oval is narrower than normal.
The Red Quasar name is the closest I could find. It is not the original font.
A note on the Centuri logo:
Don't ask me for the logo files. I do not own the rights for distribution.
The Quasar decal sheet will be available to Patreon supporters for SINGLE BUILDS ONLY. The decals with logos are not available for commercial kit production.
Posted by Chris Michielssen at 12:26 AM 3 comments: 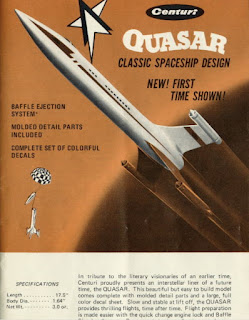 The Quasar was introduced in the 1971 Centuri catalog.
A "Classic Space Ship Design!"
My Mother liked this one, she said: "It reminds me of the old Buck Rogers rocket."
The fin pod tubes had vacu-form ram-jet tops and bottom nozzle inserts. The same pieces were used in the Centuri SST Shuttle-1 kit.
I won't be using vacu-formed or molded resin parts. I know Sirius Rocketry has them available, that'd be an easier way to go. I'll be assembling them from pieces and parts - old school. This build will be a "close" clone.
The first catalog colors were an overall white with two red fins. Later, Centuri recommended painting the body silver. I'll be home printing decals so the main body will be white. Home print decals are somewhat translucent, the red decals don't look very good when set over silver paint.

The Centuri "punched plate" style baffle was new and included in the Quasar, Centurion and Long Tom kits.
The more complex Estes "Ducted Ejection" (forward, back, forward) baffle was included in the new Bandit model first shown in the 1972 catalog. 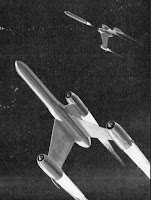 From the NAR Facebook page,
Glen Swanson posted a possible design influence:
"A conceptual drawing of an air-breathing boost vehicle. Turbojet engines are located in the body of the vehicle and the three pods. The first stage may be detached, as shown in the upper portion of the illustration, landed and used again. GE Electric, 1960."

I have to wonder if the Centuri Quasar inspired the more recent Estes Protostar.
The fins have similar curved leading and trailing edges. The Quasar ramjet tube style engine pods have been replaced with three Alien Invader nose cones.
Posted by Chris Michielssen at 12:06 AM 8 comments: 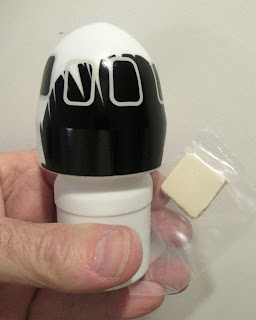 I received three new Blue Origin, New Shepard builds for Estes yesterday.
I had already built two of the original, first kits. Changes have been made. I was curious what the stability changes were.
The nose cone gets one pat of clay weight.
A single clay pat typically weighs around .25 oz.
Inside the nose cone, the top surface is fairly flat. Time will tell if the clay stays stuck to the top wall. 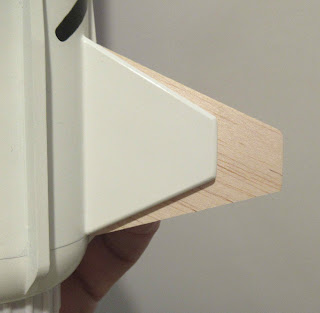 The fin span is wider now.
Measured from the root edge to the outside edge, the fin is 2 3/32" wide or 2.10".
The leading edge height is the same, 2 3/32" from top to bottom.
I have to wonder with the nose cone diameter  wider than the BT-60 body tube -
Is the airstream spread out by the nose cone and splayed outside the smaller fins?
I would think the first (smaller finned) model could fly fine with a B6-4 motor. It might be unstable with the heavier C6-5 motor.
Posted by Chris Michielssen at 12:01 AM 2 comments:

Why include this on a Rocket Building Blog? The skills learned building rockets can teach patience, build confidence and hone skills needed for home improvement.
When I moved into my Townhouse 17 years ago there were very few upgrades. All the fixtures were construction grade, the cheapest available. The toilet paper holders and towel bars were white porcelain looking like something out of the 1950s!
Little by little I've been replacing them with modern chrome or brushed nickel faucets, handles and hardware. 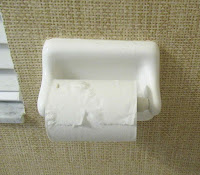 The old toilet paper holder and wallpaper.
This old T.P. holder is inset in a square cut into the drywall. It had to be chipped out!
The T.P. is a bit wet, I was just starting a damp test to soak and remove the old wallpaper. 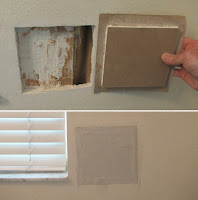 Wallpaper was removed and the wall joints caulked.
Rocket skills: New caulking - finger smoothed fillets.
The rough cut out hole was cleaned up for a better fit of the patch. This style of drywall cut is called a "California Patch." Score the back and crack leaving the paper overlap lip.
Rocket skills: Measuring, a few passes using a sharp knife and straight edge.
Apply drywall compound around the edges, flip over the patch and press into the hole. Burnish to smooth out the sides for a feathered in edge.
Rocket skills: Filling and sanding, repeat until smooth. 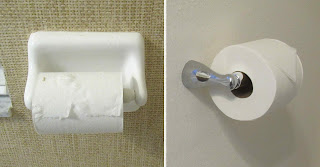 Old and new, side by side. Before screwing in the new T.P. holder the wall was primed and painted.
Rocket skills: Priming, masking and brush painting.
Much better!
Posted by Chris Michielssen at 12:03 AM 3 comments:

Email ThisBlogThis!Share to TwitterShare to FacebookShare to Pinterest
Labels: It's My Blog and I'll Post What I Want!

An old Vashon (Pre-Estes) commercial ad I found on YouTube: 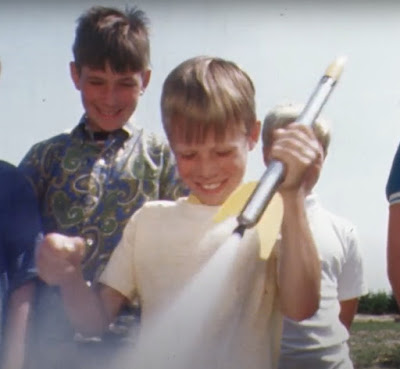 To see the video: CLICK HERE
The picture above shows an engine/propellant/timer disk test. Vashon Rockets used Freon, a self refrigerant. You could hold onto the filled rocket body and pull the nozzle plug. The aluminum rocket body would get cold as the compressed gas was expelled.
Posted by Chris Michielssen at 10:46 AM 6 comments: 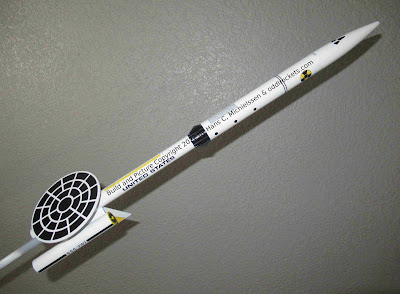 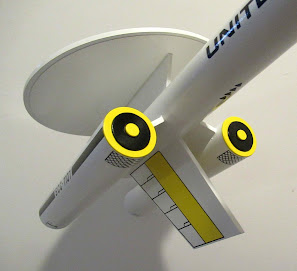 The "Propulsion Units" look great with the stepped yellow and black caps.
I've mentioned the use of three colors on models before -
Primary major color is Gloss White
Secondary is Black,
Third trim color is Yellow. 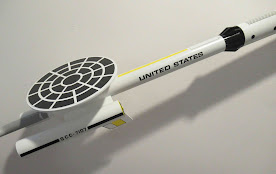 From the top side - The large disk fin. 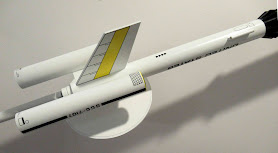 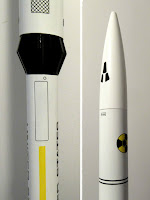 The 12 vane fins,
Nose cone and cockpit decals.
Posted by Chris Michielssen at 12:03 AM 6 comments: