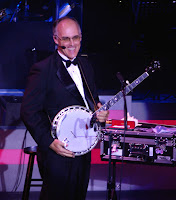 I've been a full time entertainer since 1978.

I was fortunate to grow up going to casino shows in Las Vegas, Reno and Lake Tahoe, Nevada. My mother always took us to the big headline shows of the day. I learned how to build a show from watching the greats - from Sammy Davis Jr. to Victor Borge.

I was a graphic artist and going to College when I landed my first full-time music job at Great America in Santa Clara, California. The following Summer I was at Knott's Berry Farm. While living in southern California, I did my infamous Gong Show appearance playing Dueling Banjos.

There was a few years on the road before ending up in Orlando, Florida. Since 1982 I've done thousands of shows at Sea World, Walt Disney World, Boardwalk and Baseball, Cypress Gardens and Universal Studios. 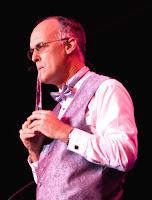 I was the opening act for Rodney Dangerfield, Jonny Rivers, Ricky Skaggs, Emmy Lou Harris and even some of the Lawrence Welk stars.

More recently, I was a headline entertainer on the Holland America Cruise Lines for over ten years. After big cutbacks in the cruise industry, I took a year off to pursue other interests including Odd'l Rockets. I went back doing shows again.To see a short show video - Click HERE
I played as many as ten instruments in a show - Banjo, Guitar, Harmonica, Musical Saw, Bones, Bagpipes, Theremin, Accordions and even a musical Turkey Baster.

I learned years ago that an audience was most interested in something they haven't seen before. Locally, I've got a reputation as the "go to" guy for the unusual.

Next to entertainment, Rocketry has been close at hand.

I'd had a fascination with space since seeing the first Mercury Redstone launches on TV.
I built too many plastic models as a kid, but they just sat on a shelf. In seventh grade, I remember looking over the shoulder of a soon-to-be best friend as he paged through an Estes Catalog. I was amazed that you could build a Midget two-stage rocket for $1.25! My first rocket was the Centuri Javelin ordered through this ad in a comic book for $1.50.

We couldn't get black powder engines by mail order in California then, the fireworks code was very strict. So I built plenty of static rockets. We finally got the proper permit after the Assistant State Fire Marshall of California inspected my Grandparent's 150 acre artichoke ranch.
We drove 1 1/2 hours to one of the few hobby stores that carried engines. I still remember the sight - dozens of new bagged kits hanging on wallboard pegs!

I entered contests and more contests. I never won the Estes Design of the Month but I did win a $25.00 gift certificate signed by Vern Estes. I still have it.
My big win was first place in the 1972 Centuri Photo Design Contest. First prize was a Rupp Scrambler Mini Bike valued at $150.00. That win got me noticed by the Centuri organization.

On a southwest vacation we made stops at both Estes and Centuri. We took the tour of the Estes plant and were lucky to get a "behind the scenes" tour of Centuri from Larry Brown.

I was in correspondence with both Estes and Centuri. I met Centuri designers at my first NARAM in 1975, held here in Orlando, Florida. We flew on the same property that would later become Universal Studios.
I stayed in contact with Centuri and attended the next two NARAMs.

I recieved a phone call from Centuri that I was being considered for an R & D position. I had a good background in rocketry, graphic arts and pre-press production. I was 19 years old at the time. 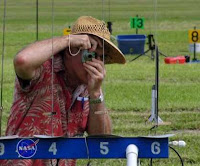 In the end I didn't get the job. Disappointed, I left rocketry for a career in entertainment. Today I'm building and flying rockets again and enjoying it more this second time around.

As of May 2019, I'm now building show and display models for Estes. My rocketry experience has gone full circle!