I didn't get to the NEFAR launch yesterday, next month should be a lot cooler.
Off to the schoolyard about 7:30 a.m. before the wind kicks up.
I was trying a faster shutter speed at 3,200 of a second. This early in the day it probably doesn't let in enough light. The burst launch shots were dark. Next time I'll go back to the 2,500 setting.

My NIKE GOON went up first with a Estes A8-3 engine to about 200'. No damage on recovery. This model is how I like them, BT-60 diameter and sturdy. 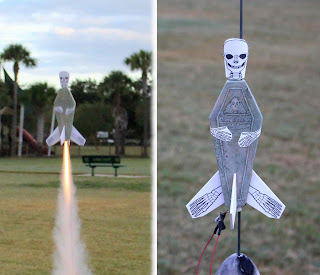 I put this one together yesterday for Halloween. That's a cardboard coffin from the Dollar Tree store. I'm naming this one "BONES".

With a Estes A10-3t it probably got 225 feet. The good news, it is very stable! I still get a little nervous when launching an odd-ball the first time. It's best to test something like this before taking it to a club launch.

Not much room for a parachute so I went with a long streamer.
One fin broke off at the root edge when it touched down. I may have to cut a notch and do a partial TTC (Thru The Casket) fin attachment.
I'll see if I can find a 6" or 8" parachute.

This build will be featured on the blog soon.


I barely caught this one in frame!
That's the MPC RED GIANT. Big and stable, a good demo rocket for a small field.
The Estes B6-4 got it to an estimated 275 feet. The spill hole in the 15" Odd'l parachute brought it in close.

Another Estes B6-4 was used in the Quest STRIKER AGM.
This one is a favorite, it looks great in the air, today reaching an estimated 275'.

With the cloud cover and very fast shutter the launch picture was too dark.
On the left is the model descending under a 15" parachute.

The crepe paper wadding didn't get blown out of the tube.
TIP: It's best not to leave the wadding in the rocket after a flight, it could still be smoldering. 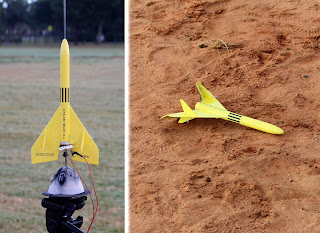 A recent hobby show picture showed a model that looked like a new version of the GYROC.
This is a clone built from old scans from the original Estes kit. I changed it up so one side of the elastic can be released between flights.

The Quest A6-4 boosted it higher than I would prefer for this small field. It may have got to 400'. Boost was quick, I finally saw it in the air at ejection.
There was drift, landing 400 feet away from the launcher on the hard baseball field.

Five up, five recovered with just a popped fin on the "Bones" rocket. A fine start to a Sunday morning.
Posted by Chris Michielssen at 12:07 AM