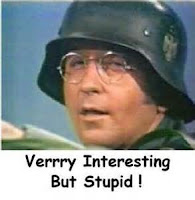 Looking at the new instructions for the Red Max, something is missing - your German skull guide.

In the late 1960s, Rowan and Martin's Laugh-In was a hit on TV. Arte Johnson played a continuing part as a German soldier.
Hogan's Heroes finished it's TV run in 1971. There was plenty of broken English and bad German accents.
The Estes Red Max was introduced in shortly after in 1972. The Arte Johnson influence was found in the instructions.

Throughout the instructions you were guided by a wisecracking German skull that would compliment you on completion of each step. That German skull was based on the Arte Johnson character.
In each step he dodged bullets, but eventually got picked off. His eyes follow the action - 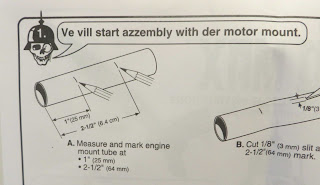 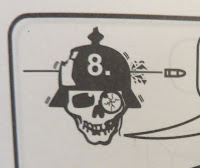 Step 8 was a head shot, cracking his Colonel Klink monocle.

The Red Max might have been politically incorrect. Well, it still is.
Over the years the instructions have mellowed quite a bit.
To see the original instructions, CLINK HERE, DAS IS GOOT, YAH?
Posted by Chris Michielssen at 1:42 AM