The Red Max first showed up in the 1971 Citation Catalog. To see it, CLICK HERE
The Citation line were boxed kits meant for sales in department store shelves. Bagged kits were more suited for hobby shops.
While you're paging through the Citation catalog, take a look at the pop pod gliding Bomarc and the chromed Quasar and Star Port launcher.
This Citation lineup also introduced the classic Patriot and Starship Vega.
The Citation engines were designated A-3 (A8-3), B-2 (B6-2) an so on. 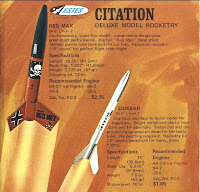 The Citation rockets were integrated into the regular Estes lineup in the 1973 catalog.

TRIVIA: The Quasar was a essentially a chromed Alpha III. As the story goes, the Quasar fins were Alpha fin cans, the tips clipped off with scissors. I don't know if that is true or not. 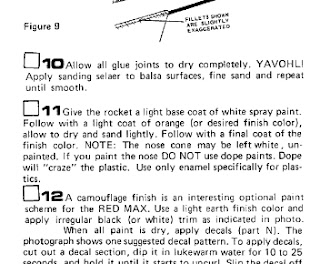 I checked the old Red Max instructions at JimZs - CLICK HERE
I remembered painting my first Red Max orange. It doesn't make too much sense, but it was suggested in Step 11. The nose cone can be left white? I don't think so -
I would think most builders painted the lower body the obvious red color.
Posted by Chris Michielssen at 1:07 AM