Here's the arc cut Scotch tape mask applied around the nose cone around 2 1/2" from the tip.

Before removing it from the glass, I marked it with a permanent marker so it could be seen against the white nose cone.

The hardest part of this wrap is getting it on straight and the overlap when the ends meet. 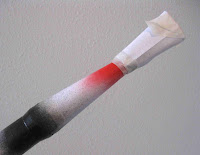 The lower raised nose cone shoulder gets a black band.

The picture shows the nose cone tip after the top was sprayed red.
The red tip and middle have been masked. The black shoulder was then sprayed.

This lower black band was also masked with Scotch tape, but because the surface wasn't tapered, I didn't have to cut a curve. I used a 1/4" wide strip. 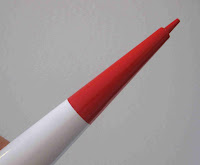 After removing the Scotch Tape, here's the red top of the nose cone.
Posted by Chris Michielssen at 1:55 AM