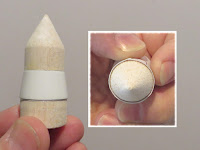 I filled and painted the lower taper of the nose section before gluing on the wraps. I would be harder to mask and paint them later.

The inset shows the overlap of the BPC wrap.
Wrap and mark, cut off the overlay and glue around the nose. 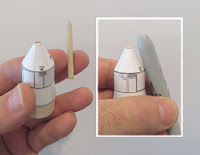 The BPC wrap is made and set on (not glue yet) the nose cone tip.
The balsa tip sticks trough the hole. Sand the tip down and even with the top of the BPC. Lift off the BPC.
Sand the tip down an additional 1/32". This makes the recess for the dowel to glue in.

You can now glue the BPC cone on. The sides were molded to the edges of the service module wrap while the glue is still wet.

I didn't glue the LAS dowel in place yet. I decided to glue on the small skirt and party hat to the dowel so the assembly could be painted separately, off the model.
It took a few dry fits to get all the positions correct.
The inset shows the two shroud edges being "molded" together. 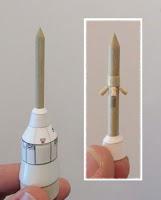 The left shows a dry fit. A small glue fillet was set where the dowel sticks through the party hat shroud.

The nozzle were glued on, evenly spaced around the dowel.
The wrap of tape is a level height reference.
Posted by Chris Michielssen at 12:22 AM