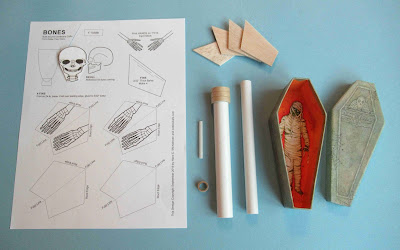 I might be able to fit a BT-20 down the center of the coffin but it looks like it'll end up a BT-5 central tube using an A10-3t engine.
I spent some time fitting the skeletal drawings onto fin skins. The bony hands will simply be a print rolled over the sides of the coffin and on to the top.
The fin and hand skins will be printed on 24 lb. paper, a second print was done on 110 lb. card stock for the skull face.
At the center is a BT-20 tube with three 20/50 rings slid on. This will be the central support for the skull facing. The BT-20 tube will end up much shorter than it is now.

My original plans was to carve the skull from an old BT-60 sized nose cone. I've done plenty of carving in the past, but this time it looked more like a cliche Alien head. The carved nose cone try was thrown out.
To the right of the skull is the outline of an overturned nose cone I first tried for the carving.
I'll go the easy route and make a silhouette skull for the nose cone.

If you have a Dollar Tree Store close by, pick up a coffin and request the bones PDF from:
oddlrockets@bellsouth.net
The PDF shown above was later revised.
Posted by Chris Michielssen at 12:54 AM