The comments continue on the forums. It looks like some have come to the same conclusions I did when this post was written two days ago.
So what happened? Here's guess on my part.

Quest tubes are Metric. MPC tubes (now Quest parts) were 15mm, 20mm, 35mm and so on.
If you are new to Model Rocketry -
The Quest 20mm engine mount tubes are larger diameter than the Estes BT-20 body tube.
Quest kits (and the OOP MPC kits) sometimes provides a yellow "insulator" spacer tube that glues inside their 20mm engine mount to bring it closer to the inside diameter of a BT-20.

Maybe Quest/Aerotech was designing and testing their Q-Jets in the 20mm engine mounts? 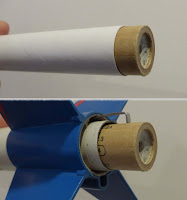 Here's a picture of a BT-20 with an Estes B6-4 engine inserted. It's a good slip fit.
Below is a Quest Viper with the MPC/Quest 20mm engine mount tube with the same Estes B6-4. This engine mount didn't come with a thin yellow insulator tube. The fit is very loose with too much open area around the engine. The older German and Chinese Quest labeled engines always require masking tape wraps, especially the even smaller diameter 18mm? German engines.
I doubt Quest wanted their engines to be used only in Quest rockets and engine mounts.

Take a close look at the fit of a Chinese Quest engine.
It won't fit in a Estes BT-20! You have to peel off the label to reduce the outside diameter for a slip fit.

In an Email, Gary S. added:

"I think you hit the nail right on the head. The E2X rocket that the engine fit was an OOP Quest Seeker that I picked up on EBay a couple of weeks ago for a song. I just noticed another problem with the QJets: it fits some engine hooks but not others. The untabbed hooks clear the hex front end, but the tabbed hooks do not. Apparently they have a longer front "catch". Big problem, as many kits include the tabbed hooks. Left a post for Fred (shreadvector) at YORF to let him know."

Regarding the engine hooks, Quest engine hooks are narrower than the Estes hooks.
Posted by Chris Michielssen at 12:10 AM