The front end of the launch lug got trimmed at a 45 degree angle for less drag.


I cut about 2" off the pod tube. I would think it'll still be stable a little shorter. I'll be using this in 1/2A BG competition, a full A engine is heavier. 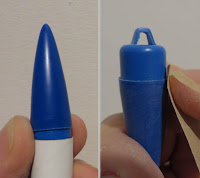 The blue plastic nose cone has a slight burr at the lip. 400 grit was used to sand it down.

The outside diameter of the nose cone now matches the body tube diameter.

The shoulder is loose though.
It took two wraps of masking tape to bring it up to a good fit.
The overhanging tape edge was slit with my Army knife scissors. Those pieces were wrapped over the rounded shoulder.
Posted by Chris Michielssen at 9:32 AM