Estes has produced three different versions of the Mars Lander.

I did built an original, the big one that debuted in 1969. The body was almost 4" in diameter. It had spring loaded leg/fins. The legs didn't really have springs in them but rubber bands for a  (hopefully) upright landing. The recommended engines in 1969 were a B4-2 and C6-3. These days, all the M.L. launches I've seen seem under powered.

Semroc has a Mars Lander kit. 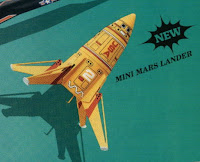 In the 1987-88 catalogs was a new, smaller "T" engine version.
This is a simpler build, there isn't spring loaded fins. There isn't much room for a parachute so recovery is by streamer. I'll be building this one next on the blog.

Estes came out with a third Mini Mars Lander in 1998 - 2002. I remember seeing this version on sale at WalMart. While it was a RTF all plastic model, it did have spring loaded legs. Molded in red and black plastic and launched with A10-3t engines. 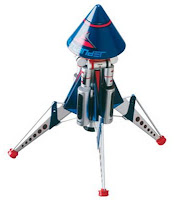 There was a fourth, sort of a Mars Lander. It had the same style spring loaded legs. The Estes Outlander was produced from 2003 - 2008. It was detailed and heavy, a C6-3 was barely enough power. Launch only in calm winds, it had a tendency to weathercock
Posted by Chris Michielssen at 1:03 AM