The UNITED STATES  and flag decals were set down the tube centered between two fins.

These were placed as if the rocket were sitting horizontally on a ground stand. One UNITED STATES decal reads up, on the other side it reads down. 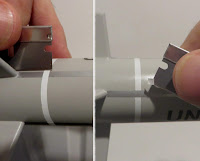 The original Enertek design had raceway tunnels (long thin strakes) above the smaller, forward fins. In place of those I used some aluminum Trim Monokote.

More white decal material strips were cut for two horizontal bands. These were set over the vertical aluminum tunnels. After the white strips dried, they were trimmed with a razor blade and the center overlaps removed.

I could have done a white decal rectangle under the flag, but didn't on this one. 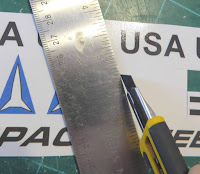 The blue fin decals will need a white background.

Cut out the decals right on the outside lines, no clear border.

These will be set on a white decal sheet to give them a white background. Let thoroughly dry before trimming. (See next blog post -)
Posted by Chris Michielssen at 1:16 AM