Florida is still hot but it wasn't as bad as an August launch! Low winds, maybe 5 mph and clear skies.
I'm still getting used to a new camera. I bought a used 75 - 300 mm zoom lens and that led to more camera adventures.
Roger and Bracha Smith (JonRocket.com) drove me up to Bunnell.

Here's a new one made up from the new Odd'l Rockets BT-20H heavy wall tube, the SPACED NEEDLE. It's about 38" tall. It was launched with an Estes B6-4 but ejection was early, it could have used a B6-6.
Very straight boost and no damage under a 12" parachute. Estimated altitude is 500'.

I hoped to launch my Estes Honest John with a D12-5. I waited a rack round to use the 3/16" diameter rod. I adjusted the angle of the rod a few degrees and tightened the wing nut. I turned to pick up the lead wires and clips. The rod swivel didn't hold and the rocket fell breaking off the two short 3/16" lugs. Not a hard fix, but I was ticked off and took a break for lunch.

I really like the GOONY F-16. Too bad I can't get the nose cones, it'd be a good Odd'l kit.
It got great altitude with a B6-4 to to an estimated 450'. Roger asked if I used a C engine. I said no, it was a Chinese BP Quest B6-4. The performance of the Chinese Sky B6-4 engines were pretty strong.

The KOKOPELLI had a beautiful boost on an Estes C6-5 to 650 feet.
Another flyer said it was a very straight boost.

This Kokopelli was a kit bash of the Estes Monarch, picked up on clearance. The design was a near copy of the Thrustline Arapahoe. 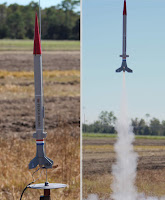 My last launch (only four today) was the new Quest STRIKER AGM. I almost got the launch pciture in frame!

Perfect flight with an Estes C6-5 and a little walk out to the mid power pads for pick up. No cracking of the fins glued to the plastic tail cone. I would estimate the altitude at 600'.

Next month is the two-day Bunnell Blast and (fingers crossed) cooler weather.
Posted by Chris Michielssen at 12:16 AM

Email ThisBlogThis!Share to TwitterShare to FacebookShare to Pinterest
Labels: Launches