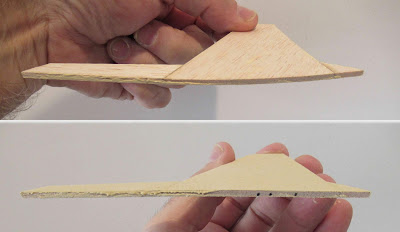 I've read about it many times on the forums.
Builders give up on Elmer's Carpenter's Wood Filler (CWF) after trying it once, complaining about the balsa warping.
It will warp the balsa after the first side dries, see the top picture. The bottom got the filler, the top hasn't had CWF brushed on yet. There is a upward warp. You could paint both sides at once, but that gets messy.

Below is the same fin, I marked the root edge with some pen dots to be sure I'd be comparing the same one.
The lower picture is the same fin after the CWF on both sides had dried, before sanding. After the initial side coat warped, painting CWF on the other side counteracted the warp straightening out the fin.
Sometimes there will still be a slight warping. Some gentle flexing will straighten it out before gluing onto the body tube.
The thinner the balsa, the more warping.

The old Sanding Sealer also warped balsa, but not as much as the water based CWF filler. I was told by an older model plane builder that the dope would continue to shrink, long after it was dry to the touch.
Posted by Chris Michielssen at 12:07 AM