The humidity has finally dropped! I was looking forward to a cooler, dry launch.
The field had some wet grass, I should have worn my cruddy shoes! Winds were low.
Kirby brought the launchers and served as RSO. Everybody pitched in to set-up and break down the equipment. 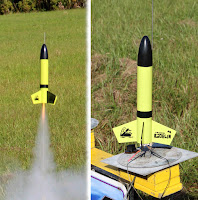 I haven't launched the FRANKEN GOBLIN in a while.
This rocket was build with spare parts stripped from other retired models - hence the name.
A German made Quest B6-4 got it up to about 350'. I used a very colorful kite tail streamer for recovery.

My GOONY G-16 was another B6-4 launch to 325' with a 12" Odd'l chute recovery.
If I could get these plastic nose cones in bulk, this could be a successful Odd'l kit. 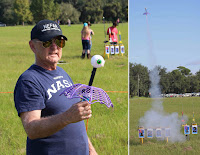 Jim Lytle launched his "Eye In The Sky".
He said it only cost $2.00 to make made up of a Dollar Store solar eye and a spider web candy bowl.
Jim also launched his new, tall Semroc Andromeda. 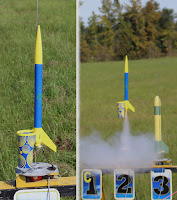 My new favorite rocket, the Estes SOLO had a second launch with a B6-2 motor.

Boost took it to 300'. At ejection the annular ring glider performed as advertised with a wide circling return. The main rocket body landed under a spill hole chute. 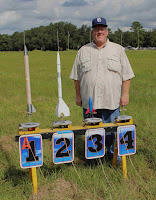 Steve Moon launched a rare Odd'l Rockets Squatty Body to a high altitude using an Estes B6-4. The streamer brought it back close to the launchers. 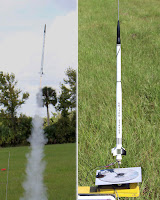 The only previous launch of my Estes SAROS clone was unstable with an A8-3 engine. I added 1/2 oz. of clay weight in the upper BT-20 tube.
Today it flew straight and high with the Estes B6-4 engine. I would guess it got to 425', my highest of the day.

David Hofmann launched a new upscale Estes Beta.
This is a single stage, as if the two stacked fin sections were one piece.
A textbook flight and recovery.

To finish out my day I flew the Estes NIKE APACHE with an Estes B6-4 to 375'.
This was made from an earlier 1980s kit, not the newest re-release.

Five up, five recovered with no damage found.
I'm looking forward to the cooler Winter launch season.
Posted by Chris Michielssen at 1:38 AM

Email ThisBlogThis!Share to TwitterShare to FacebookShare to Pinterest
Labels: Launches